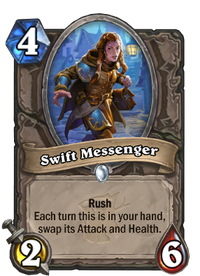 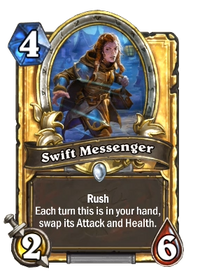 Rush
Each turn this is in your hand, swap its Attack and Health.

Swift Messenger is a common neutral minion card, from the The Witchwood set.

Swift Messenger can be obtained through The Witchwood card packs, or through crafting. 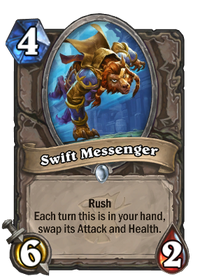 In its base form, Swift Messenger's high health allows it to easily survive attacking into most 3- and 4-drops; however, its dismal attack means that it is unlikely to remove any but the most fragile minions. Its Worgen form is comparable to Fireball in its damage-to-mana ratio, allowing it to easily kill most 4-drops and even most 5-drops; however, with only 2 health, it is very unlikely to survive. It's generally better to play this card in Worgen form as a high-power removal card, but because it transforms automatically in the hand, it can be somewhat unreliable.

Lady in White sets this card's stats to 6/6, removing its weaknesses in both forms.

Summon
Neither snow, nor rain, nor witch.
Attack
Move!

Swift Messenger is a member of the Gilnean Royal Guard.[1]

Swift Messenger's name and summon quote are a reference to the United States Postal Service creed "Neither snow nor rain nor heat nor gloom of night stays these couriers from the swift completion of their appointed rounds".