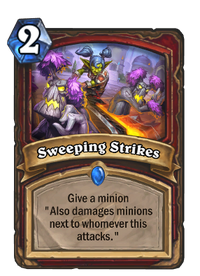 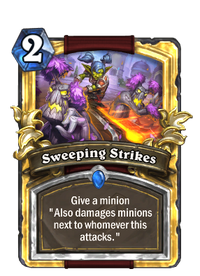 Give a minion "Also damages minions next to whomever this attacks."

Sweeping Strikes is a rare warrior spell card, from the Rise of Shadows set.

When used on a strong minion, Sweeping Strikes becomes an effective method of removal, taking out 3 minions with one attack. It's best used on a minion with Rush for a bigger, immediate board impact.

It can also be used to triple the value of certain effects. For example, use it on Zilliax to heal 9 Health, or on Akali, the Rhino to draw 3 +5/+5 Rush minions.

One unorthodox play you can make with Sweeping Strikes is to use it on an enemy minion then hit it with Supercollider, causing it to deal damage to itself and the minion behind whoever it attacked.

Sweeping Strikes is an Arms warrior ability that, when activated, causes all of the warrior's single-target damage abilities within the next 12 seconds to also hit one additional target for 75% of the normal damage.