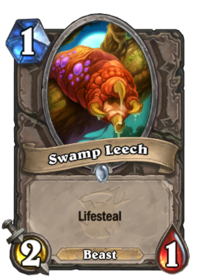 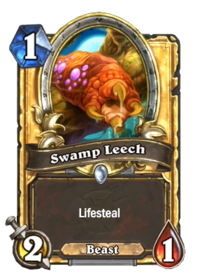 A face only a druid could love.

Swamp Leech is an common neutral minion card, from the The Witchwood set.

While this card is a cheap Lifesteal minion, its single health point means it is unlikely to heal you more than once without dying. Unless played specifically for Beast synergies, this card is almost strictly inferior to Voodoo Doctor; even if used for its Beast tag, Vicious Scalehide generally offers much more utility due to its higher health and Rush for only 1 more mana.

Although this card is too low-impact to see practically any play on its own, it does give Build-a-Beast a cheap Lifesteal option alongside Vicious Scalehide for added longevity.

This is a weak card in Arena; like mentioned before, the card has too low-impact on the game to reach the par of playability.