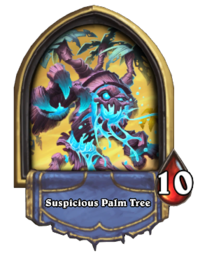 Suspicious Palm Tree is a boss that can be encountered initially in Chapter 2 of Tombs of Terror. After completing Chapter 2, this boss encounter will be available in any chapter.

These decks correspond only to level 4. If this boss is encountered on level 3, his deck will be missing 5 random cards from listed below.

This boss is likely a treant that has been corrupted by Hagatha, similar to Rotten Applebaum.