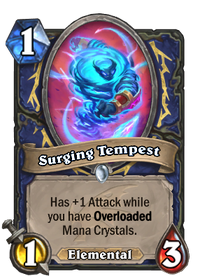 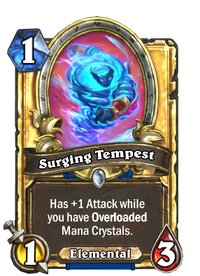 Has +1 Attack while you have Overloaded Mana Crystals.

Surging Tempest is a common shaman minion card, from the Descent of Dragons set.

Surging Tempest can be obtained through Descent of Dragons card packs, through crafting, or as an Arena reward.

This card has great stats for a 1-cost minion and fits into an aggressive Shaman deck using Overload cards. It can be combined with Storm's Wrath to generate a 3/4 minion for 2 mana.

In Wild, Surging Tempest works well with Ancestral Knowledge and Totem Golem. However, it's compares unfavourably to Tunnel Trogg, although as a small bonus it gains bonus Attack if you play it while overloaded and it's an Elemental.