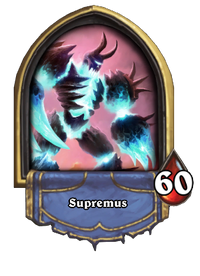 A monstrous abyssal looking to call upon fiery elemental rage. 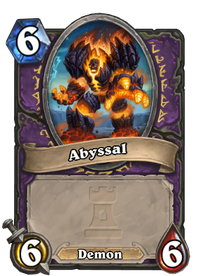 Supremus is an abyssal.

Supremus is the second boss in Black Temple. The fight is a battle for survival. After dropping this boss, the next four bosses (Shade of Akama, Teron Gorefiend, Reliquary of Souls and Gurtogg Bloodboil) can be killed in any order.
Abyssals are demonic constructs similar to infernals, but made from rougher, more jagged material. Their flames can be either red, green or even blue. The ritual to summon an abyssal is complicated and often fails. When a failure occurs, a small piece of the demon typically remains behind, seething with a combination of latent demonic rage and despair at its own dysfunction. Ancient battlegrounds are littered with such stones.