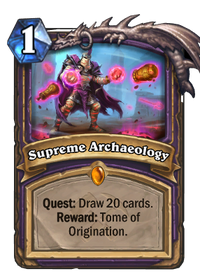 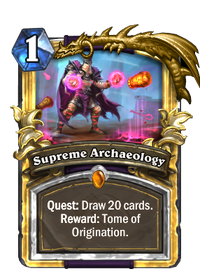 Supreme Archaeology is a legendary warlock spell card, from the Saviors of Uldum set.

Supreme Archaeology can be obtained through Saviors of Uldum card packs, through crafting, or as an Arena reward. 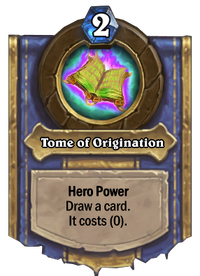 The Warlock specializes in card draw, making this quest straightforward for them to complete. The real challenge comes in making use of the reward, which allows them to draw a card and reduce its cost to 0 without incurring damage, making it superior to Life Tap.

If completed normally, by the time the quest is done, they would only have 6 or 7 cards left in their deck, which would make the Hero Power more of a late-game finisher, but leaves it prone to the luck of of order of card drawn as they near Fatigue. It is most effective if the remainder of your deck has powerful, high-cost cards to utilize the new Hero Power to its fullest.

The drawback of nearing Fatigue can be mitigated with cards that shuffle into deck to increase your longevity. Adding in Casts When Drawn cards will aid in completing the quest faster, since each card will draw another after being drawn. Plot Twist with a large hand is also very effective at quickly completing the quest.

Arch-Villain Rafaam synergizes well with Supreme Archaeology; since Legendary minions generally cost high, you're more likely to draw and discount something that is well worth the value. Lorekeeper Polkelt also synergizes well with the quest by guaranteeing you draw your high-cost cards off the top, maximizing your mana cost reduction.

Adding Soul Fragment generating cards will speed up quest completion, but as a downside, after completing the quest there's a chance your Hero Power will draw a Soul Fragment and waste the mana cost reduction. While Lorekeeper Polkelt can counter this, using him not only means all Soul Fragments are shuffled to the bottom, if you shuffle in more Soul Fragments after playing him, the deck gets shuffled again and nullifies his effect. However, this can be beneficial if you want to undo Polkelt's effect after drawing your big cards.

The masterminds of E.V.I.L. are also canvassing Uldum for artifacts. Rafaam brings his very... particular set of skills to his fellow warlocks in the form of Supreme Archaeology.[1]

The Tome of Origination is unique to Hearthstone, but its name implies a connection to the Forge of Origination−a titan-forged device capable of destroying all life on Azeroth−the Halls of Origination that surround the forge, or the Staff of Origination sought after by Rafaam during the events of The League of Explorers.