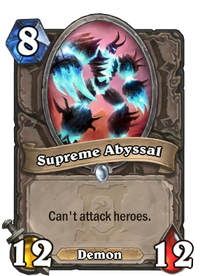 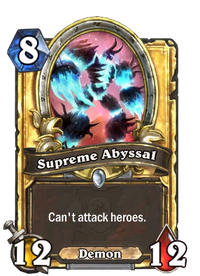 Yet, you still feel attacked.

Supreme Abyssal is a common neutral minion card, from the Ashes of Outland set.

Supreme Abyssal can be obtained through Ashes of Outland card packs, through crafting, or as an Arena reward.

This minion offers very high stats for its cost, but cannot be used against the opposing hero. This makes it excellent at controlling the board. However, the lack of Rush makes it very slow and susceptible to single-target removal. If Silenced, it can also deal a surprise 12 damage to the opponent. Although the statline is impressive, it's not much of a discount over similar vanilla beaters like Ultrasaur and Faceless Behemoth. Supreme Abyssal is much better in Arena than it is in constructed for this reason.

As a Demon, Supreme Abyssal can be summoned earlier using cards like Fel Summoner, Voidcaller, and Raging Felscreamer.

Abyssals are demonic constructs similar to infernals, but made from rougher, more jagged material. Their flames can be either red, green or even blue. The ritual to summon an abyssal is complicated and often fails. When a failure occurs, a small piece of the demon typically remains behind, seething with a combination of latent demonic rage and despair at its own dysfunction. Ancient battlegrounds are littered with such stones.
Supremus is the second boss in Black Temple. The fight is a battle for survival. After dropping this boss, the next four bosses (Shade of Akama, Teron Gorefiend, Reliquary of Souls and Gurtogg Bloodboil) can be killed in any order.