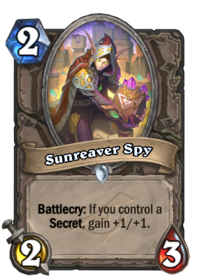 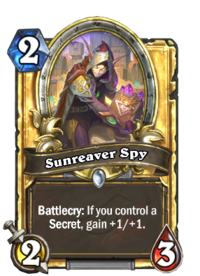 Sunreaver Spy is a common neutral minion card, from the Rise of Shadows set.

Sunreaver Spy can be obtained through Rise of Shadows card packs, through crafting, or as an Arena reward.

Summon
Got something to hide?
Attack
Show me!

The Sunreavers are a faction of blood elves who represented the Horde in Dalaran. Named for their leader, Archmage Aethas Sunreaver, the Sunreavers sought to have their people readmitted as members of the Kirin Tor, a plight they were successful in. They also joined the Horde Expedition in Northrend. The Sunreavers were eventually expelled from the Kirin Tor some time after Jaina Proudmoore came into power, and those remaining returned to Quel'Thalas. The Alliance equivalent of the Sunreavers is the Silver Covenant.