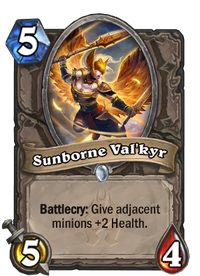 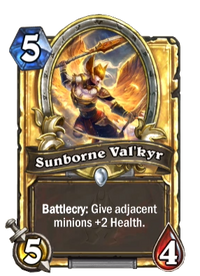 Sunborne Val'kyr is a common neutral minion card, from the Knights of the Frozen Throne set.

Sunborne Val'kyr can be obtained through Knights of the Frozen Throne card packs, or through crafting.

This card can give a total 5/8 stats on the board for only 5 mana. The +2 Health buff can be used to trade minions efficiently with your opponent and keep valuable minions alive for longer. It works very well with the Priest class, which can heal said minions back up after trading.

Because this card costs 5 mana, it can be played after a Lightspawn to turn it into a 7/7.

Summon
I will purify the fallen!
Attack
Die as you lived!

This val'kyr's golden appearance suggests that it is one of Odyn's val'kyr, rather than one of the Lich King's. Sunborne Val'kyr is also specifically the name of a miniature val'kyr companion pet which can be purchased upon reaching Revered reputation with the Valarjar faction in World of Warcraft, and whose Pet Journal description reads: "Val'kyr are considered "sunborne" when they are honored in the presence of Odyn."