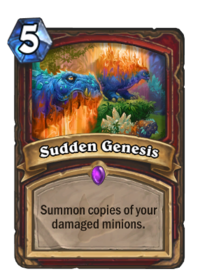 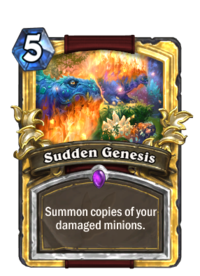 Summon copies of your damaged minions.

Being hurt can make you another person.

Sudden Genesis is an epic warrior spell card, from the Journey to Un'Goro set.

Sudden Genesis can be obtained through Journey to Un'Goro card packs, or through crafting.

Example: You have a damaged Grommash Hellscream on the board, with 10 Attack (due to his Enrage effect) and 4 remaining Health. This spell summons a second enraged Grommash Hellscream with 10 Attack and 4 Health. Due to his Charge ability, this copy can attack immediately.
Example: On an empty board, you play a Dread Corsair and a Cornered Sentry, then Whirlwind to damage both minions. Sudden Genesis summons a copy of each minion, resulting in four minions total, all with their Taunt ability and 1 damage.

Sudden Genesis can be utilized by Control style Warriors, either on its own or in conjunction with cards like Whirlwind to help fill a board with Taunt minions and replenish a damaged board. It can also be used in combination with Blood Warriors to refill a hand with Taunt minions or duplicate valuable Battlecry minions.

Blood Warriors and Sudden Genesis are similar to one another such as producing copies of damage minions with sudden genesis making copies onto the battlefield while Blood Warriors makes copies into your hand.

Similarly, all these cards are rarity of epic cards.