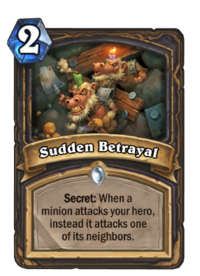 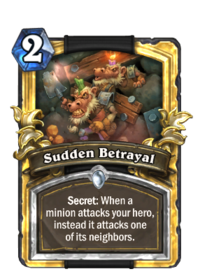 Secret: When a minion attacks your hero, instead it attacks one of its neighbours.

You thought he was your bro-bold, but turns out he's your foe-bold.

Sudden Betrayal is a common rogue spell card, from the Kobolds and Catacombs set.

Sudden Betrayal can be obtained through Kobolds & Catacombs card packs, or through crafting.

Sudden Betrayal can be a very useful method of not only defending your hero against an attack, but removing enemy minions for free. The minion attacking the your hero will instead attack a randomly selected adjacent minion, or in the case of your opponent only having two minions, their other minion. The triggered minion can attack friendly minions with Stealth and will not have its decision influenced by Taunt.

The Secret will not trigger if your opponent only has one minion on the board. While this does limit the potential for the card to be wasted, it also means the card will not save you from one big minion doing continuous damage.

If you suspect your opponent has Sudden Betrayal active, make sure to place your minions in an arrangement that won't allow them to kill their neighbors. If the Secret is played when you already have several minions on the board, make sure to attack with your weakest minion first.