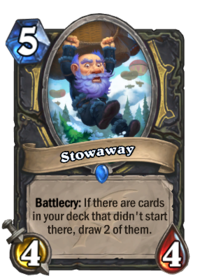 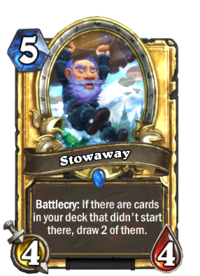 Battlecry: If there are cards in your deck that didn’t start there, draw 2 of them.

Cut him a break. Even economy class tickets are pretty expensive these days.

Stowaway is a rare rogue minion card, from the Descent of Dragons set.

In any deck whose strategy involves shuffling in cards from your deck, this card let you draw them quickly. It's an obvious synergistic card to put in decks that use cards like Pogo-Hopper, Shadow of Death, and Waxadred.

Note that negative cards like Bombs and Corrupted Blood can also be drawn with this card, so take caution against those cards.

Summon
Sneaking on board was a bad idea!
Attack
Turrrbulence! 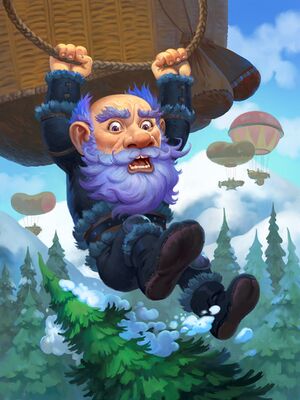