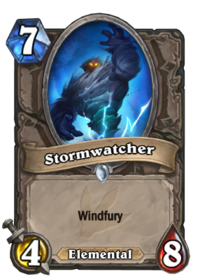 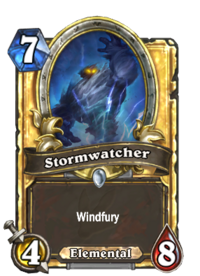 Stormwatcher is a neutral common minion card, from the Journey to Un'Goro set.

Stormwatcher can be obtained through Journey to Un'Goro card packs, or through crafting.

Stormwatcher is a decent minion for Arena. Its Windfury grants it a large amount of damage. It also has high health, making it more likely to survive multiple attacks (or your opponent's turn) than other Windfury minions.

As of Knights of the Frozen Throne, Stormwatcher is arguably the best minion to use to grant Corpsetaker Windfury. As a Windfury minion, it has effective synergy with Cold Blood, which can allow it to deal up to 16 damage in a single turn, oftentimes almost guaranteeing winning the game. This makes it a good fit in Tempo Rogue and other similar tempo decks.

Stormwatcher's 4 Attack can make it especially problematic for Priests to counter due to their lack of removal spells targeting 4-Attack minions.

In Shaman, this minion is completely outclassed by Walking Fountain, which has Windfury as well as Rush and Lifesteal with the same statline and Elemental subtype for only a single extra mana.

Stormwatcher is a powerful Air Elemental.