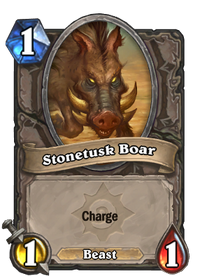 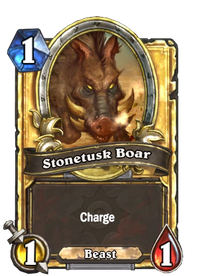 This card is boaring.

Stonetusk Boar is a neutral minion card, from the Basic set.

Two copies of Stonetusk Boar are automatically included in all players' collections upon unlocking the hunter class.

Two Golden copies of Stonetusk Boar are a reward for raising a hunter to levels 53 and 54.

Stonetusk Boar is uncraftable and cannot be crafted or disenchanted.

Two copies of regular Stonetusk Boar (Core) are obtained for raising sum of all your class levels to ?.

Two copies of golden Stonetusk Boar (Core) are obtained for winning 500 games across all classes.

Stonetusk Boar (Core) is uncraftable and cannot be crafted or disenchanted.

With its Charge ability, Stonetusk Boar becomes an instant 1 damage for 1 mana. This can be useful for removing low Health enemy minions, especially if combined with cards like Hunter's Mark. The Boar can also be buffed by minions such as Dire Wolf Alpha and Timber Wolf to provide larger amounts of burst damage.

However, the Boar's 1 Health makes it very vulnerable to removal, especially by mages, druids and rogues, whose hero powers will often allow them to destroy the Boar effortlessly. Especially when played against these classes, playing the Boar without immediate buffs or a specific target is often a weak play.

Stonetusk Boar's main advantage lies in its Beast minion type, allowing for synergy with a range of hunter cards including Starving Buzzard, Scavenging Hyena and Houndmaster. These synergies can improve the Boar substantially, making it a common choice in hunter Beast decks. Its 1 cost allows it to fit well with a Starving Buzzard/Unleash the Hounds combo, effectively making it a Novice Engineer with Charge, while Scavenging Hyena allows its death to grant a 2/1 buff. Its burst capabilities also fit well with hunter aggro decks.

For other classes, Elven Archer offers a similar functionality without being restricted by Taunts and without risking being destroyed in the process. Stonetusk Boar is therefore only recommended for if aiming to boost its Attack with cards such as Raid Leader, or make use of its Beast type with related cards. Even for hunters, On the Hunt is usually better, as it deals 1 damage without endangering the 1/1 Beast it summons. Stonetusk Boar has had some use in the Rogue class as a charge threat in the Quest deck.

Stonetusk Boars are beasts found roaming the lands of Elwynn Forest. They use their rock hard tusks to skewer their prey. Be careful when approaching, they keep to themselves, but will not hesitate to attack when threatened.