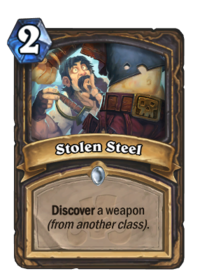 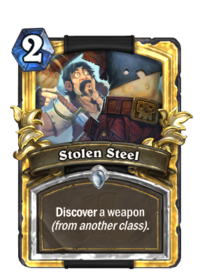 Discover a weapon (from another class).

Because Thrall wouldn't lend me Doomhammer.

Stolen Steel is a common rogue spell card, from the Rastakhan's Rumble set.

This card is fairly weak since Rogue's Dagger Mastery ensures they always have a weapon available, and they have a selection of decent weapons already. Paying two mana for a semi-random choice is low value. If you're looking for weapon synergy, it's generally better to just include cards like Assassin's Blade and Kingsbane.

There are some interesting choices however, particularly among Legendary weapons. Dragon Soul can amass a reasonable dragon army if you're holding cheap spells. Twig of the World Tree will fill and refresh your mana crystals, which can be done on demand thanks to your hero power. Gladiator's Longbow and Gorehowl are both excellent removal options which Rogue usually doesn't have access to. Unfortunately, the wide range of options and the randomness of Discover still makes the card too unreliable.

Stolen Steel might have some small use in a Tess Greymane deck, since it's the only way to guarantee class cards in a Rogue mirror match. That said, it compares horribly to Hallucination or Blink Fox in other match ups, and has no synergy with Spectral Cutlass.