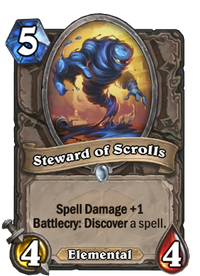 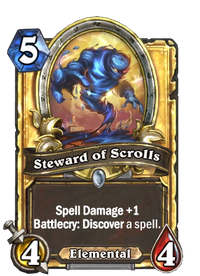 Oh dang it, I spilled ink elemental all over my essay!

For the uncollectible card in Book of Heroes, see Steward of Scrolls (boss).

Steward of Scrolls is a common neutral minion card, from the Scholomance Academy set.

Steward of Scrolls can be obtained through Scholomance Academy card packs, through crafting, or as an Arena reward.

Effectively an Azure Drake, but trading the card draw for a Discover and the Dragon tag for the less useful Elemental tag. The main advantage Steward of Scrolls has over Azure Drake is the flexibility of its spell generation. Since it offers you the best of three choices, you can take whatever you best need in the current situation. Steward of Scrolls is somewhat expensive for a Discover, making hard to cast your spell on the same turn you play this. It is often better to proactively use it rather than save it to dig for an answer.