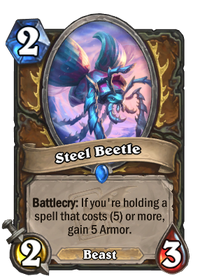 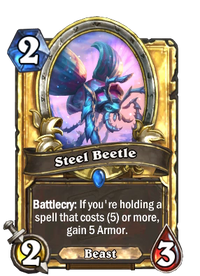 Battlecry: If you're holding a spell that costs (5) or more, gain 5 Armor.

Steel you can trust—fashioned from the husk of an over-sized creepy-crawly.

Steel Beetle is a rare druid minion card, from the Galakrond's Awakening set.

Two copies of regular Steel Beetle are obtained by defeating Rafaam and Galakrond in Galakrond's Awakening's Chapter 4 of Explorers campaign.

This card gives a healthy amount of Armor and has good stats to boot, but its requirement makes it tricky to use, like Garden Gnome. As a defensive card, it has clearer usage with decks that Untapped Potential, which often runs Starfall, Nourish, and Hidden Oasis to trigger the Armor gain, and has a weak early game that Steel Beetle's low cost and Armor gain covers for.