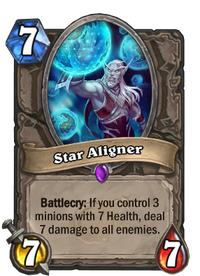 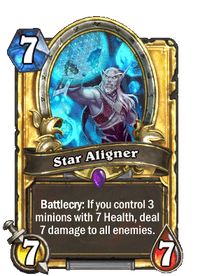 Battlecry: If you control 3 minions with 7 Health, deal 7 damage to all enemies.

"You're a Sagittarius? Me too! Just gimme a sec."

Star Aligner is an epic neutral minion card, from The Boomsday Project set.

Star Aligner can be obtained through The Boomsday Project card packs, or through crafting.

While this card's Battlecry is extremely powerful, its requirements are strict to match it. It's extremely difficult to have two 7-Health minions ready for Star Aligner due to a lack of cheap 7-Health minions, with this card being no exception. If the opponent is able to put even a small amount of pressure on you, they can disrupt your combo by dealing damage to your minions. It's best to use this card with effects that can circumvent the mana cost restriction.

In Standard, outside of Luna's Pocket Galaxy and Supreme Archaeology, activating Star Aligner will often require to have a board first. Some cards that could potentially make this easier are Fel Lord Betrug, who can summon temporary minions for the Battlecry if he can survive a turn, and High Priest Amet, where you can flood the board with cheap 7-Health minions.

In Wild, Star Aligner's Battlecry is far easier to pull off with Aviana and Kun the Forgotten King. Juicy Psychmelon lets you draw three out of four of the combo pieces needed in one go if you include a 8 or 9-mana minion with 7 Health like Medivh, the Guardian. Not only that, Brann Bronzebeard can also be used to to double the damage and any minion who can reuse its Battlecry like Ancient Brewmaster and Flobbidinous Floop will make it even deadlier. Alternative means include using Carnivorous Cube on a 7-Health minion, a Doomguard pulled with Skull of the Man'ari then copied with Bloodbloom and Ectomancy, and other cost reduction effects like Emperor Thaurissan and Jungle Giants.

Summon
The stars align!
Attack
Look to the skies!

Star Aligner is a nightborne. Astrology is known to be an established part of nightborne culture, as evidenced by the Star Augur Etraeus boss in the Nighthold.