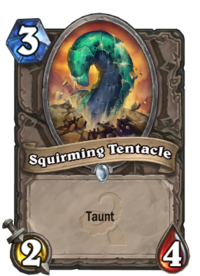 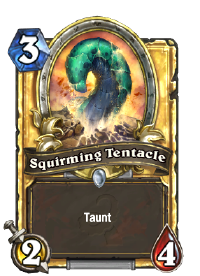 Yeah, I think we can agree that killing the squirming tentacle first is a good idea.

Squirming Tentacle is a common neutral minion card, from the Whispers of the Old Gods set.

Squirming Tentacle can be obtained through Whispers of the Old Gods card packs, or through crafting.

By itself, 2 attack, 4 health, and taunt for 3 mana is fair value in an Arena deck.

This card is a strictly worse version of Phantom Militia, since it has the same stats but gains the Echo ability.

This appears to be one of the myriad tentacles of the Old Gods, erupting from beneath the earth where they have long been imprisoned.