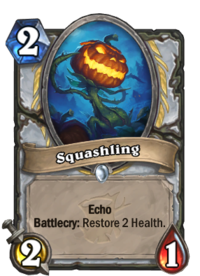 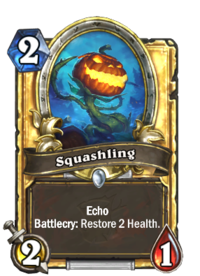 Everyone hail to the squashling song!

Squashling is a common priest minion card, from the The Witchwood set.

This card is a 2 mana Voodoo doctor with echo, which means you could put up to 5 2-1 on the board and heal either you or your creatures for up to 10 health. Combined with Auchenai Soulpriest or Embrace the Shadow, it becomes a massive source of damage that you can use either as a finisher or as a very strong tempo swing.

Ambulatory pumpkin creatures, unofficially referred to as "pumpkin soldiers", are found at various locations in World of Warcraft.

It's flavor text is a reference to the song "This is Halloween" from Tim Burton's 1993 animation movie The Nightmare Before Christmas, where the lines are "Everyone hail to the pumpkin song".