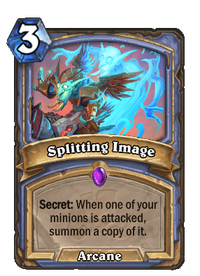 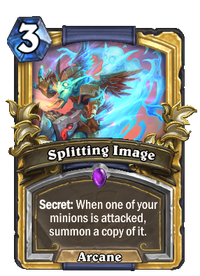 Secret: When one of your minions is attacked, summon a copy of it.

Sometimes you get punched so hard they see double.

Splitting Image is an epic mage spell card, from the Rastakhan's Rumble set.

Splitting Image can be obtained through Rastakhan's Rumble card packs, or through crafting.

Splitting Image activates on any attack on a friendly minion. This includes attacks from other friendly characters, such as from Mass Hysteria. In contrast, Betrayal does not count as an attack, and therefore will not activate Splitting Image.

Splitting Image serves as a cheaper Molten Reflection or Faceless Manipulator controlled by your opponent. It works best with high-value or high-priority minions on your side of the field, such as Archmage Antonidas. Beware of Polymorph or other Transform effects, which will negate the value of this card.

When opposing a Mage with a Secret, it's a good idea to try to attack lower-value minions first to play around this effect.