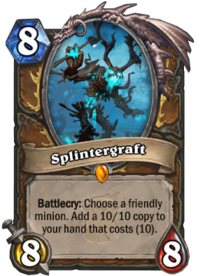 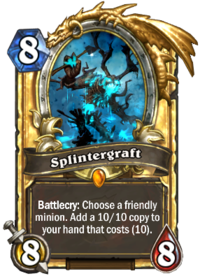 For the boss of the same name, see Splintergraft (boss)

Splintergraft is a legendary druid minion card, from the The Witchwood set.

Splintergraft can be obtained through The Witchwood card packs, through crafting, or as an Arena reward.

Splintergraft provides a reasonably strong body for its cost, and can provide an even bigger threat through its Battlecry. Minions that can bolster their own stats, like Bewitched Guardian, Crypt Lord, and Ancient of War, can become very powerful when boosted to 10/10. Alternatively, copy a minion with a strong effect but weak stats; for instance, a Stonetusk Boar can potentially end the game if turned into a 10-attack Charge.

The drawback of this ability is that the copy also costs 10 mana. While you should be able to play it within two or three turns of Splintergraft at most, finding an opportune moment may be difficult depending on your opponent's board. Duskfallen Aviana, though extremely risky, can allow you to bypass the cost completely, and in Wild, the original Aviana can also be useful. You can also try to cheat the minion out using cards like Giant Anaconda if it doesn't have a useful Battlecry.

Alternatively, you can copy a card that can have its mana cost lowered like Happy Ghoul, Arcane Tyrant, and Mulchmuncher. You'll often be able to play both the free minion, Splintergraft, and a free 10/10 on the same turn.

Summon
I do the chopping now!
Attack
Chop them down!

Splintergraft is a "haunted treant"[1] that is unique to Hearthstone.

No new wood is being cut near Gilneas, and with Crowley’s engineering projects demanding resources, supplies of lumber in the city are dwindling rapidly. Most who venture beyond the gates with axe in hand do not return, and those few brave souls who have spin quite a tale. They tell of roots rippling out of the ground like hungry serpents, and splintered stumps assembling themselves into a jagged, towering monstrosity wielding a woodsman’s axe.

They are no doubt referring to Splintergraft. She is the closest thing we’ve encountered to an undead treant, and her rage-fueled strength is immense. But brute strength is far from her most frightening aspect. Splintergraft can infect other creatures, turning their flesh and blood to wood and sap. The transformation wildly increases her victims’ strength and toughness, but renders them powerless to resist the Witchwood’s commands.

Yearning for vengeance against those who split her trunks in life, Splintergraft is impatient for the day that the roots of the Witchwood make a tomb for Gilneas.[2]