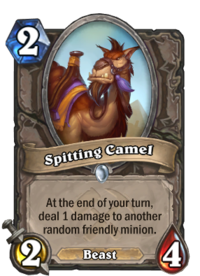 At the end of your turn, deal 1 damage to another random friendly minion.

Were you expectorating another bad pun?

Spitting Camel is a common neutral minion card, from the Saviors of Uldum set.

Spitting Camel can be used as a slightly-overstatted beat stick in decks that don't use minions. The high health of this minion makes it ideal to threaten your opponent's play when going first.

If Spitting Camel has secured the board, it's usually a good idea to still follow it up with a 3-drop to maintain tempo, even if that 3-drop will take 1 damage.

It can also be used to trigger Enrage, on-damage, and certain Deathrattle effects. You can use it with Acolyte of Pain to guarantee a card draw.

Camels are a type of herbivore mammals native to Uldum. They were introduced in World of Warcraft: Cataclysm. The ettin Dormus the Camel-Hoarder in Feralas is known for keeping numerous camels at his disposal.

Fennimore Quigley is credited with milking the first camel and breaking the record for "longest unintentional flight", all in the same afternoon.