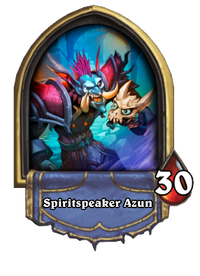 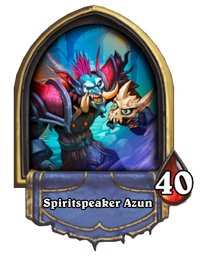 This troll priest speaks with the dead... twice.

Spiritspeaker Azun is a boss that can be encountered during the Dungeon Run.

Be cautious if playing a control or spell deck and fighting him on round 4, as the 8HP heal from each mistress of mixtures (which will likely be revived) can add up to a lot of healing, and a well-played Amara can lead to him evading a game-ender and resulting in a loss to fatigue.

Using his ability to good effect with your own deathrattles can make him one of the easier bosses.

Val'anyr is especially good if playing a Paladin for twofold reasons:

When using this strategy, minions should ONLY be played if they have this enchantment, playing minions otherwise is wasting a possible recipient

Spiritspeaker Azun
Hah hey, dat's a good one.
Nobody rests in peace here.
Lemme give dat one a hand.
Dat one's better off dead.
You only die twice, hah hey.

Spiritspeaker Azun appears to be a Witch Doctor thanks to his ability to speak to the dead.

Witch doctors (or witchdoctors) are spellcasters.

Witch doctors often use the smoke of an herb known as Witchbane to draw evil from its hiding places and arcane. They can carve their names into ancestral staves. They work with juju.