Spirit of the Dead

From Hearthstone Wiki
Jump to: navigation, search
Spirit of the Dead
Regular 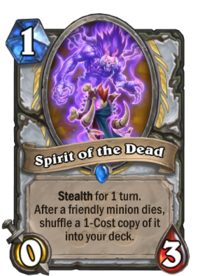 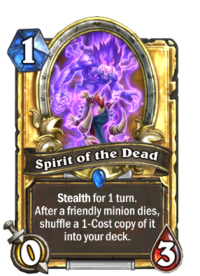 Stealth for 1 turn.
After a friendly minion dies, shuffle a 1-Cost copy of it into your deck.

Just because you’re dead doesn’t mean you’re off the team.

Spirit of the Dead is a rare priest minion card, from the Rastakhan's Rumble set.

Spirit of the Dead allows you to effectively recycle your own minions back into your deck, effectively staying one step ahead of Fatigue from your opponent and gaining tempo from the discounted copy once drawn. It is however fragile and vulnerable to removal and high-damage board clear. The best way to use Spirit of the Dead is to play it behind big taunt minons or when destroying your own minions for a trade so that it's effect becomes immediately useful and thus ideally should only be played midgame and lategame when big minions are present. Battlecry minions shuffled in by spirit of the dead become specially valuable, in particular, Bwonsamdi the Dead.

Two or more Spirits of the Dead can be on the board to effectively duplicate your minions shuffled, but this is a risky strategy.

The Spirit of the Dead is, as the name suggests, a spiritual manifestation[1] of Bwonsamdi, the loa of death.