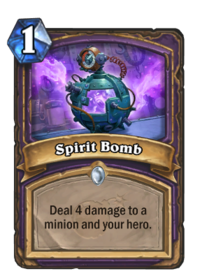 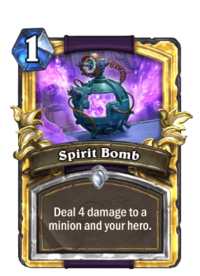 Deal 4 damage to a minion and your hero.

Spirit Bomb is a common warlock spell card, from The Boomsday Project set.

Spirit Bomb can be obtained through The Boomsday Project card packs, or through crafting.

An alternative to Soulfire and Shadow Bolt. Compared to Soulfire, Spirit Bomb has a much softer downside but loses the ability to target the opponent's hero. Its downside also cannot be avoided without making your hero Immune. This makes Spirit Bomb far worse for aggressive decks like Zoolock, but reasonable for Handlock. Compared to Shadow Bolt, it saves two mana for a relatively small downside. While this is a good deal, it may not be desirable in an aggressive meta where every hit point matters.

Like all self-damaging cards, Spirit Bomb can be used to activate cards like Duskbat, Lesser Amethyst Spellstone, and Nethersoul Buster.