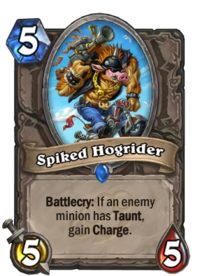 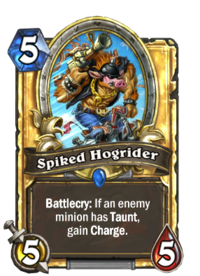 Battlecry: If an enemy minion has Taunt, gain Charge.

Did you know the Hogchoppers compete every year at the Mirage Raceway? They do. It's a real group.

Spiked Hogrider is an rare neutral minion card, from the Mean Streets of Gadgetzan set.

Spiked Hogrider can be obtained through Mean Streets of Gadgetzan card packs purchased online from the Battle.net shop, or through crafting.

Shamans can use Ancestral Healing or Hex to transform one of the enemy's minions into a Taunt minion before playing the Spiked Hogrider, thus allowing it to gain Charge.

Summon
Livin' high on the hog.

Spiked Hogrider, along with his cohorts Leatherclad Hogleader and Tanaris Hogchopper, are "a Quilboar biker gang",[1] one of the many smaller factions operating in Gadgetzan, separate to the three main crime families.[2] Despite the historical animosity between quilboar and the Horde, two of the three bear the Horde's insignia and their vehicles appear goblin in design. The quilboar normally prefer primitive weapons and crude shamanic magic to mechanical technology, but these three appear to have embraced all that Gadgetzan has to offer.