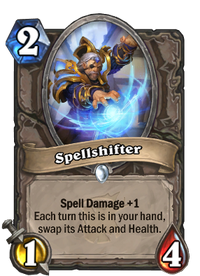 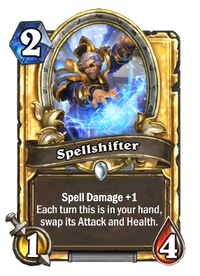 Spell Damage +1
Each turn this is in your hand, swap its Attack and Health.

He also goes by "worg-lock."

Spellshifter is a common neutral minion card, from the The Witchwood set.

Spellshifter can be obtained through The Witchwood card packs, or through crafting. 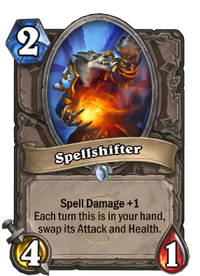 This card looks appealing at first glance due to being a cheaper version of Dalaran Mage; however since the swapping effect happens between 1 attack and 4 health, the card becomes a very weak 4/1 half of the time; this means if you are looking for spell damage minion, Kobold Geomancer is generally a more reliable option.

This is card is weak in Arena; spell damage effect is unlikely to offer any significant value, while both stat distributions of the card are quite weak.

Summon
Let me show you the arcane.
Attack
Ta-da!