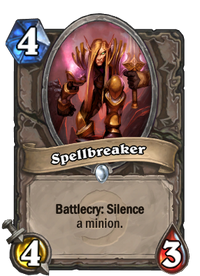 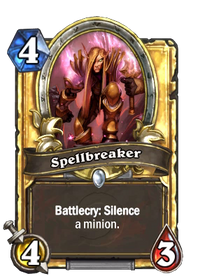 Spellbreakers can rip enchantments from magic-wielders. The process is painless and can be performed on an outpatient basis.

Spellbreaker is a common neutral minion card from the Hall of Fame set, formerly from the Classic set.

Spellbreaker can be obtained through crafting only.

Spellbreaker is one of few sources of Silence for all classes, which makes it useful for neutralizing minions with powerful effects or have been buffed with other cards and effects. It can shut down minions that rely on card effects to boost its stats like Edwin VanCleef, and in aggressive decks, it can remove Taunt to break through the opponent's defenses, making it a more cost effective way to maintain aggression.

It's a higher end and much more cost-efficient alternative to Ironbeak Owl.

Summon
Your magic shall not save you.

Spell breakers are blood elf warriors trained to combat magical enemies. They first appeared as a unit in Warcraft III: The Frozen Throne.

Elven warrior trained to disrupt and contort magical energies. These Blood Elven warriors, fresh from the destruction of their homeland, have turned a new eye towards the dying land of Lordaeron. Can it possibly remain their home? Has Spell Immunity. Attacks land units.