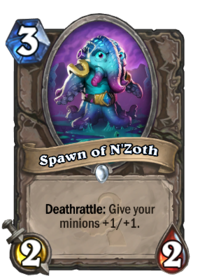 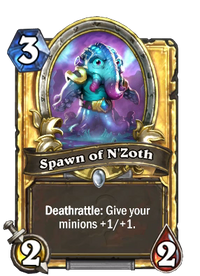 Deathrattle: Give your minions +1/+1.

Spawn of N'Zoth is a Tier 2 minion in the Battlegrounds game mode.

Effectively a smaller, non-tribe-locked version of Goldrinn, the Great Wolf and King Bagurgle, Spawn of N'Zoth shares their role as a suicide buffer in the early game. Like Kaboom Bot, it can form part of a Deathrattle build, and when Golden it can provide protection for Baron Rivendare. Usually best in first position or as a singleton taunt, buffed with Defender of Argus. However, the relatively small buff given by this card and its lack of tribe synergies means it is usually better off being sold in favor of more specialized minions later on.