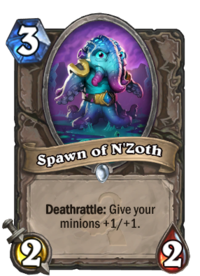 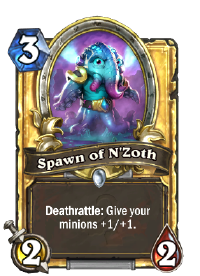 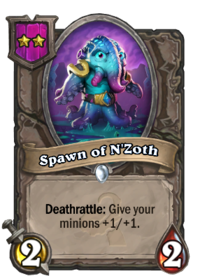 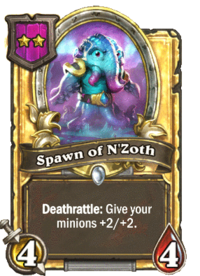 Deathrattle: Give your minions +1/+1.

Spawn of N'Zoth is a common neutral minion card, from the Whispers of the Old Gods set.

Spawn of N'Zoth can be obtained through Whispers of the Old Gods card packs, or through crafting.

This card works very well in combination with Stealth minions, or in a sticky deck (however, remember that Deathrattles activate in the order they are played). It also works well in Zoo decks due to the large number of minions they typically command, and it works well combined with cards that can summon multiple minions like Forbidden Ritual, Unleash the Hounds, or Protect the King. Another interesting option is Onyxia.

For maximum benefit, try to summon as many minions as possible onto the board before triggering this minion's Deathrattle. It usually makes sense to trade the Spawn before other minions, since its buff may enable better trades for the other minions.

This is the offspring of N'Zoth, the Corruptor. Its unique blend of sinister and cute is distinctly original to Hearthstone.