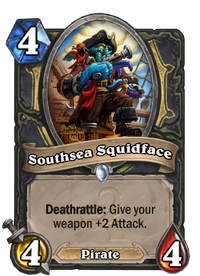 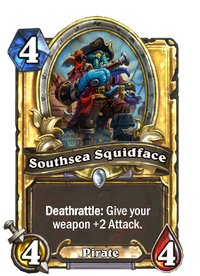 Deathrattle: Give your weapon +2 Attack.

Quick! Before I drown! Let me sharpen your sword for you.

Southsea Squidface is a common rogue minion card, from the Whispers of the Old Gods set.

Southsea Squidface can be obtained through Whispers of the Old Gods card packs, or through crafting.

This minion's reasonably beefy stats, while average for its cost, allow it to pose a reasonable threat to your opponent if they lack removal, or trade into a couple of weaker enemy minions or a stronger one before granting the effect of its Deathrattle. Best played while you already have a weapon equipped, preferably at full Durability, just in case your opponent has some form of removal to use on Squidface. If you don't have any stronger weapons, even a 3/2 Wicked Knife can prove helpful in killing enemy minions or directly attacking the opponent, chipping away at their Health.

Like other Deathrattle minions, this minion makes a good combination with Unearthed Raptor, though due to the required Mana for preparation will likely have to be spread between two turns at least.

Summon
My mother does love this face.

Southsea Squidface appears to be a faceless one who has taken up the life of a pirate on the South Seas. Along with N'Zoth's First Mate, this is the first known mention of n'raqi pirates.