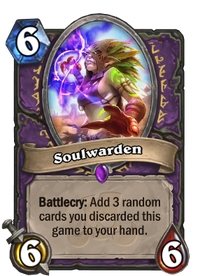 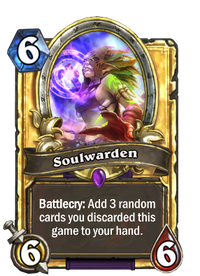 Battlecry: Add 3 random cards you discarded this game to your hand.

Soulwarden is an epic warlock minion card, from the Rastakhan's Rumble set.

Soulwarden can be obtained through Rastakhan's Rumble card packs, or through crafting.

Discard this card for the effect of Expired Merchant, which will add 2 copies to your hand when it is destroyed. When each of those are played, they will then add a further copy to your hand.

Summon
And you thought you were lost.
Attack
Feeble soul!

Soulwarden appears to be a blood troll.