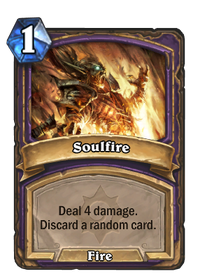 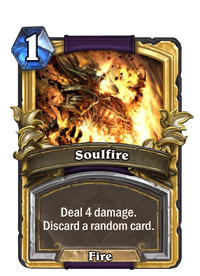 Are you lighting a soul on fire? Or burning someone with your OWN soul? This seems like an important distinction.

Soulfire is a warlock spell card from the Basic set.

Two copies of Soulfire are a reward for raising a warlock to level 6.

Two Golden copies of Soulfire are a reward for raising a warlock to levels 28 and 30.

Soulfire is uncraftable and cannot be crafted or disenchanted.

If you cast this spell with no other cards in hand, you will be unable to discard a card, essentially gaining 4 damage with no penalty. It's still useful if you are willing to give up any of the cards in your hand as 4 damage is a significant amount of damage for 1 mana.

Soulfire has cheap synergy with cards such as Fist of Jaraxxus and Malchezaar's Imp which benefit from the cheap discard effect.

Soul Fire is a Destruction warlock spell from World of Warcraft. It is a high damage, mana efficient spell that deals a large chunk of Fire damage to the target. The spell generally suffers from a very long cast time, but a related ability can reduce its cast time by 50% when used on low health targets, allowing it to be used as a powerful execute ability. 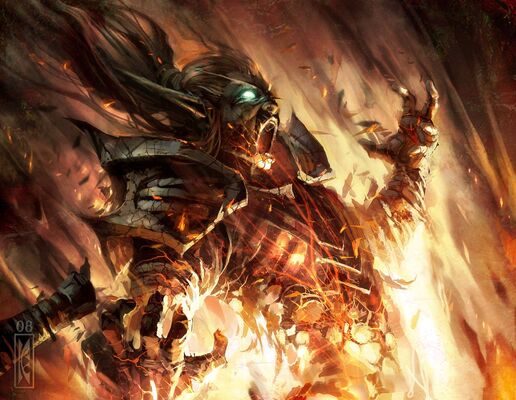