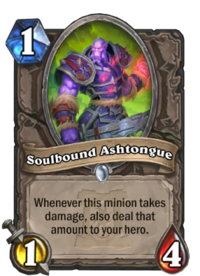 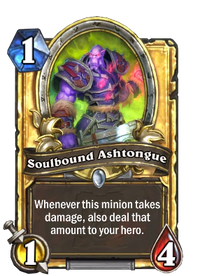 Whenever this minion takes damage, also deal that amount to your hero.

He claims to be "soulbound," but I just think he's clingy.

Soulbound Ashtongue is a common neutral minion card, from the Ashes of Outland set.

Soulbound Ashtongue can be obtained through Ashes of Outland card packs, through crafting, or as an Arena reward.

Soulbound Ashtongue has high health for a 1-cost minion, at the cost of having Wrathguard's drawback of also damaging your hero when hit. While its high health gives it an increased chance to survive in the early game and gain buffs, its drawback can be exploited by your opponent by using minions with high attack or high-damage spells that only target minions, putting your hero in danger. On the other hand, being a neutral minion gives it lots of flexibility when used by other classes.

Soulbound Ashtongue can be given Lifesteal by Lightforged Blessing or Apotheosis on curve to counteract its damage (as you will be healed back again), while warriors can build Armor to protect themselves. Warlocks can also use Soulbound Ashtongue as a cheaper substitute for Wrathguard with hero self-damage synergy such as Diseased Vulture, Darkglare and Zzeraku the Warped. In Wild, they can also cast Treachery on it to make the opposing hero take the damage instead. Warriors can use Silas Darkmoon to trade the Soulbound Ashtongue to their opponent, then use spells like Shield Slam and potentially OTK them.

The Ashtongue tribe, also known later as the Ashtongue Brotherhood, is a tribe of Broken draenei feared among all Broken. In Warcraft III, Akama's tribe had the appearance of Lost Ones. It consists of the most vicious and bloodthirsty individuals, handpicked by Akama himself.