Soul of the Forest

From Hearthstone Wiki
Jump to: navigation, search
Soul of the Forest
Regular 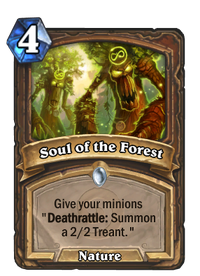 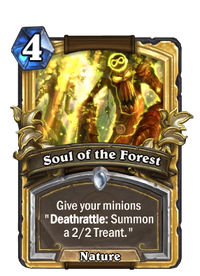 Give your minions "Deathrattle: Summon a 2/2 Treant."

"Reforestation" is suddenly a terrifying word.

Soul of the Forest is a common druid spell card, from the Classic set. It gives each friendly minion a Deathrattle that summons a 2/2 Treant.

Soul of the Forest can be obtained through Classic card packs, through crafting, or as an Arena reward. 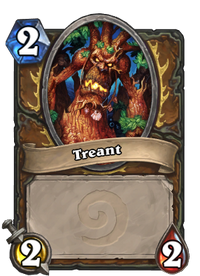 Useful for when you have lots of minions on the board and are expecting your opponent to clear the board with an AoE spell card like Hellfire or Arcane Explosion.

Will stack with other Deathrattles and will also stack with itself; a minion affected by two Soul of the Forests enchantments will spawn two Treants when they die.

It can also be used in combination with Poison Seeds in Wild Mode to summon twice as many Treants.

Soul of the Forest is a druid talent in World of Warcraft. It is said to be a gift from Aessina, a greater wilderness spirit venerated by the night elves and dryads, and given to the Druids.