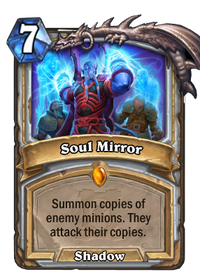 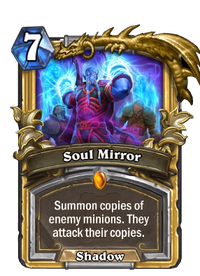 Summon copies of enemy minions. They attack their copies.

Soul Mirror is a legendary priest spell card, from the Ashes of Outland set.

Soul Mirror can be obtained through Ashes of Outland card packs, through crafting, or as an Arena reward.

On the baseline, Soul Mirror is effectively a more expensive Lightbomb. However, the value comes from what minions you're able to copy. This has a couple uses:

If Soul Mirror copies a minion with more health than attack, you will keep that copy in play. This can include minions with strong ongoing effects or just reasonable stats. You can use other minions in play to finish off weakened enemy minions when using Soul Mirror this way. Alternatively, it allows you to copy enemy Deathrattles, stealing their Deathrattle minions while trading into them. In both cases, you can steal one particular minion or Deathrattle while simultaneously clearing the opponent's board.

Soul Mirror works best in a Control deck, since it requires enough board space to match the opponent's board. It however is not very good in Resurrect Priest, since it will usually fill your dead pool with undesirable minions.

If playing against an opponent who potentially can use Soul Mirror, you can try to play around it by filling up your board with small minions, positioning your biggest minions on the right-hand side of the board, and isolating enemy minions either with freeze effects or low-attack high-health Taunt minions. Though it is also mindful to consider that the opponent can have other area of effect board clear options too, such as Breath of the Infinite, Holy Nova, and Plague of Death.

The Soul Mirror is a magic crystal that allows the Auchenai to communicate with the spirits of the dead.

This card's art depicts Exarch Maladaar, leader of the Auchenai.

Maladaar was once a member of the Sha'tari, the researchers of the naaru. He discovered that D'ore's corpse was attracting the souls of draenei who died in the Genedar's crash and allowed the draenei to commune with them. Auchindoun was constructed and the Auchenai established to protect the dead, with Maladaar promoted to a member of the Council of Exarchs.

After the fall of Shattrath City, many Vindicators, priests, and Rangari fled to Auchindoun in hopes of defending it from the Horde. Maladaar organized the military defenses, and they fiercely defended Auchindoun from Teron'gor and the Shadow Council. They also received aid from Auchindoun's departed spirits, and together slaughtered many of the Shadow Council's agents. As Maladaar and his forces closed in, Teron'gor sought out the warlocks who pooled their powers together and reached beyond the veil of reality. They sought to bring a powerful demon into the world, but in their wild desperation found something else instead: Murmur. This otherworldly elemental creature was pulled to Draenor from a distant corner of the universe, and the shockwave on its arrival ripped the earth asunder. Many draenei were killed and Auchindoun was blasted apart. Waves of destructive energy rolled out and leveled the surrounding forest.

Maladaar and a handful of his draenei used their magics to shield themselves from the blast. But though they survived, they no longer had the numbers to resist the Shadow Council. Teron'gor and his warlocks overwhelmed the draenei and bound them in chains, and contained Murmur deep within Auchindoun as well.

Maladaar would eventually be driven mad by the loss of everyone and everything he had ever loved. His lunatic dedication to the preservation of their memory drove him to a mastery of the dark arts. Once he turned to necromancy, he created Shirrak the Dead Watcher.

After his death by the adventurers of the Alliance and Horde, the naaru D'ore appeared and redeemed his spirit, which eventually appeared to Greatfather Aldrimus and thanked him for having Maladaar killed.