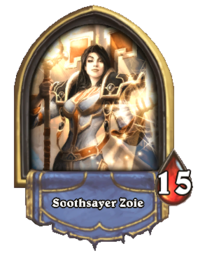 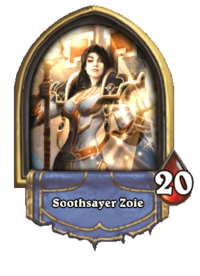 This healer will fight for her city. Break out the sooths!

Soothsayer Zoie is a boss that can be encountered in The Dalaran Heist.

Zoie gimmick is that her minions are fully healed at the start of her turn. The best course of action is to focus on her minions before going face.

Madame Lazul
Zoie is a soothsayer. But you and I both know some sooths are better left unsaid.

vs. George the Fallen

George the Fallen
Where were you when Karl needed you?
Soothsayer Zoie
Ummm. Here? Healing people. Probably. Who's Karl?

At least I'm watching out for you.
Now, stay out of trouble!
You're looking better! ...For now.

Heals a minion with full HP

All patched up!
Just a few scratches.
You're looking better than ever!

Soothsayer Zoie
Become a priest, they said... Healing is fun, they said...
Most healers complain about losing patients, but I keep gaining them.
Sooth... sooth...

A healer's got to have more than one trick up their sleeve.

Ah, look at this novice.

Given up on helping already? What a shame.

Soothsayer Zoie
Fix yourself up next time.

Soothsayer Zoie is unique to Hearthstone.