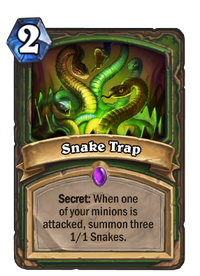 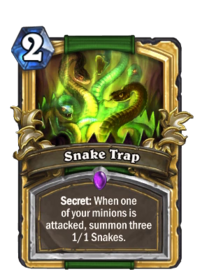 Secret: When one of your minions is attacked, summon three 1/1 Snakes.

Why did it have to be snakes?

Snake Trap is an epic hunter spell card, from the Classic set. When triggered, it spawns three 1/1 Snakes.

Snake Trap (Core) is uncraftable and cannot be crafted or disenchanted. 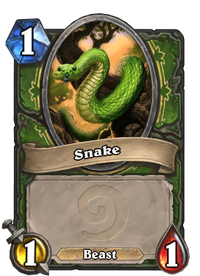 Snake Trap combos excellently with Knife Juggler, potentially triggering the minion to throw 3 knives when the trap is triggered. If the knives hit the attacking minion itself, it can even be destroyed mid-attack, preventing it from dealing damage to its target. However, the opponent can still remove the Knife Juggler using a spell or other effect without triggering the Secret.

Snake Trap also works well in conjunction with Starving Buzzard. If you are able to get your opponent to trigger Snake Trap while Starving Buzzard is on the field, you will draw 3 cards. You can also use Snake Trap in conjunction with Scavenging Hyena, sacrificing your Snakes by attacking enemy minions in order to buff your Scavenging Hyena with up to +6/+3; or with King of Beasts for an easy +3 Attack boost.

The weak minions provided by the trap can be useful for synergies such as Frostwolf Warlord and ongoing effects like Raid Leader, but are weak against AoE like Wild Pyromancer and can even work against you in the case of the opponent playing Unleash the Hounds.

Snake Trap is a glyphed hunter ability which places a trap at the target location. When triggered, it releases several venomous snakes which will move toward and attack nearby targets, applying a Crippling Poison that reduces movement speed. The snakes last for up to 15 seconds before expiring.