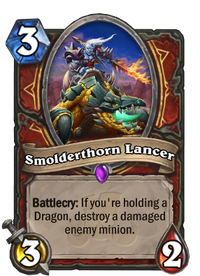 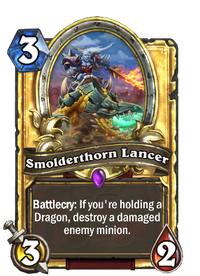 Battlecry: If you're holding a Dragon, destroy a damaged enemy minion.

Smolderthorn Lancer is an epic warrior minion card, from the Rastakhan's Rumble set.

Smolderthorn Lancer can be obtained through Rastakhan's Rumble card packs, or through crafting.

Smolderthorn Lancer could be used as an Execute in Baku Warrior, where Execute wouldn't be able to be used because of Baku's requirement.

In Dragon decks, Smolderthorn Lancer is a good source of minion removal plus a 3/2 body, which typically would count as a 2 mana 3/2 and a 1 mana Execute, the only difference being the requirement of having a Dragon in your hand, which shouldn't be much of a problem with a deck with dragons and Dragon Roar to gain more dragons.

The Smolderthorn tribe of trolls are a tribe of forest trolls led by War Master Voone that belongs to the Dark Horde.

The Smolderthorn tribe of trolls are one of two tribes of forest trolls that belong to the Dark Horde, a renegade group of orcs, trolls, and ogres, who dwell in Blackrock Spire. Commanded by Rend Blackhand, the Dark Horde has not given up the battle to claim Azeroth, although Rend's forces are significantly smaller than Thrall's Horde. A group of warlocks drives the Dark Horde, which has not relinquished the original Horde's involvement in demonic magic. The Dark Horde is essentially still fighting the Second War, but Rend and his group know that they stand little chance of success, despite their alliance with the black dragonflight.

The Dark Horde's numbers are dwindling, and it has no means of recruiting new members. Realistically, these evil individuals are well aware that their days are numbered. Such knowledge has given them a grim mindset: they are desperate, bitter, and completely ruthless in battle.

Smolderthorn trolls revere the memory of Zul'jin and consider the Firetree tribe acceptable allies, but despise all other forest trolls as deserters, particularly the Revantusk tribe, which is loosely affiliated with Thrall's Horde. Ironically the Revantusks consider the Smolderthorn trolls traitors for failing to leave Blackrock Spire and aid Thrall and his followers, for the Revantusks believe that Thrall leads the true Horde. In general, trolls outside the Dark Horde have long since decided that the Smolderthorn and Firetree trolls are insane for allying themselves with the black dragonflight and continuing to fight an unwinnable war (if, indeed, it can be called a war).

This particular Smolderthorn troll appears to be riding a proto-dragon.

The concept of Dark Horde trolls riding dragons (proto-dragons or otherwise) is unique to Hearthstone.