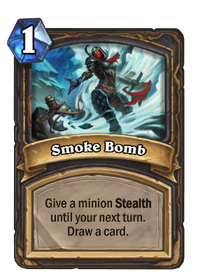 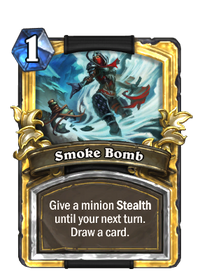 Give a minion Stealth until your next turn. Draw a card.

Smoke Bomb is a rogue spell card, from the Arena unique set.

Smoke Bomb is unique to the Arena and can only be obtained via drafting it during an Arena game.

Smoke Bomb is uncraftable and cannot be obtained from card packs.

Smoke Bomb differs from Conceal and Master of Disguise in that it may give an enemy minion Stealth. This allows you to temporarily nullify Taunt, and also make an enemy minion untargetable by your opponent until it attacks. This would for example prevent your opponent from using Hand of Protection to trade for free, or Cold Blood to improve a trade, for one turn.

Smoke Bomb is a Subtlety rogue honor talent in World of Warcraft.