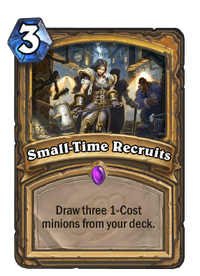 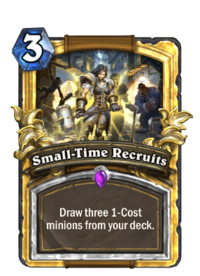 Now we know why they wear tiny watches.

Small-Time Recruits is an epic paladin spell card, from the Mean Streets of Gadgetzan set.

Small-Time Recruits can be obtained through Mean Streets of Gadgetzan card packs, or through crafting.

This card fits well in aggressive decks that feature lots of cheap minions to flood the board early and overwhelm the opponent before they can stabilize. Those decks tend to run out of cards fast, making this an excellent way to refill your hand and continue pressuring your opponent.

Small-Time Recruits is generally outclassed by Crystology in terms of cost and variety of what it can draw.