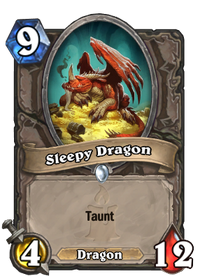 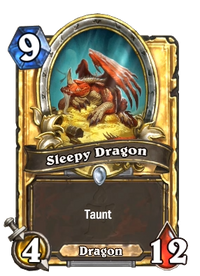 Local villagers call her "Naps Under the Mountain."

Sleepy Dragon is a common neutral minion card, from the Kobolds & Catacombs set.

Sleepy Dragon can be obtained through Kobolds & Catacombs card packs, or through crafting.

With a great 12 health and decent 4 attack, Sleepy Dragon can be a very powerful tool in the late stages of a game, freezing up an opponent's minions altogether. While there are other high-cost Dragons out there that have more powerful effects, Sleepy Dragon has the greatest stats on a 9-mana taunt minion to date equaling Giant Mastodon. Its 4 attack protects it from Priest cards as well.

While there are many better alternatives in Constructed Mode short of Recruit-based decks, its powerful body and impact make it a good Arena pick.

Based on its appearance, Sleepy Dragon is a member of the red dragonflight.

The red dragonflight are dragons that have red scales and breath fire. Their fire can either destroy or bring life. They are led by Alexstrasza the Life-Binder. The titan Eonar charged Alexstrasza with protecting life. The red dragons generally wish to protect all life on Azeroth as their queen does, while battling those who wish to do the world harm. In particular, the black dragonflight and their Twilight aberrations served as the red dragon's foremost enemies. Despite their mission, some red dragons hold a mistrust, even animosity, towards mortals because of the events of the Second War.

Many red dragons were enslaved during the Second War by the Dragonmaw clan under Nekros Skullcrusher. Alexstrasza's flight aided the Horde and Alliance against the Scourge during the War against the Lich King, while the mortals aided her against the insane blue dragonflight in the Nexus War. During the events of the Cataclysm, the red dragons spearheaded the assault on the last bastion of Deathwing's flight in the Twilight Highlands storyline.