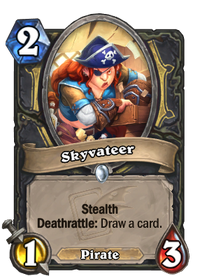 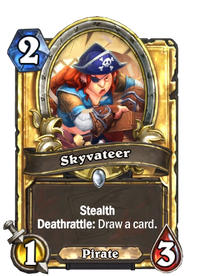 When you go without fruits in an airship, you get a nasty case of skyvy.

Skyvateer is a common rogue minion card, from the Galakrond's Awakening set.

Two copies of regular Skyvateer are obtained by defeating Hagatha the Vengeful in Galakrond's Awakening's Chapter 2 of Explorers campaign.

This is a Pirate version of Loot Hoarder, but with Stealth and a 1/3 statline instead. Because of its awkward statline, it's only use is in Pirate decks, which otherwise lack good card draw, and in Stealth decks as an activator for Ashtongue Slayer and Greyheart Sage.

Summon
Who in their right mind hides loot?
Attack
They're onto us!