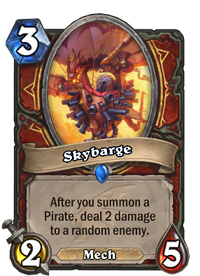 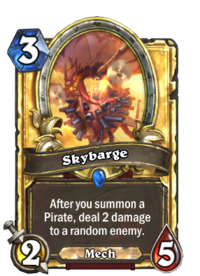 After you summon a Pirate, deal 2 damage to a random enemy.

It's more of a ship-gun than a gunship.

Skybarge is a rare warrior minion card, from the Descent of Dragons set.

A warrior version of Ship's Cannon that provides great synergies with Pirate Warrior deck. The additional 2 health makes it hard for your opponent to destroy, making the ability almost guaranteed.

Skybarge can be followed with cheap pirates like Sky Raider, or Pirate generators like Sharkfin Fan and Hench-Clan Hag. It also synergizes well with Pirates that are summoned for free, such as Parachute Brigand or Patches the Pirate.

In wild, combining Ship's Cannon and this card can make Pirate Warrior clear minions easier and be able focus the enemy hero with attacks.

If your opponent plays a Skybarge, killing it should be a priority. Skybarge can deal a ridiculous amount of damage on the following turns if left alive. 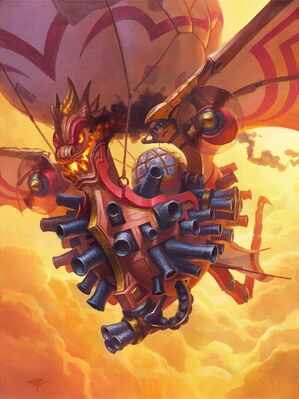