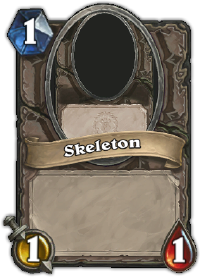 Skeleton was a neutral minion. While still found in the game data, the card is no longer available, and has essentially been removed from the game.

This minion may have been intended for use in the game, but removed, or simply never implemented, following changes. It was already removed from the game by the time the beta went live, indicating its removal (or at least addition) during the alpha. However, unlike Skeleton (unused 3/3), it has not yet been removed entirely from the game data.

This card is also notable for lacking any art.

Doug Alexander Gregory is the artist for the artwork assumed to have been intended for this card, as seen on Skeleton (unused 3/3); however, this art does not appear in the constructed image.