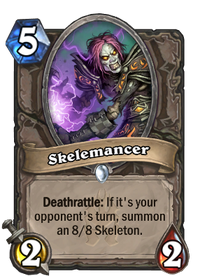 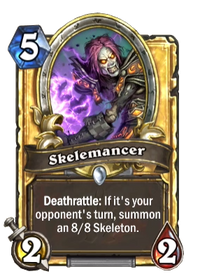 Deathrattle: If it's your opponent's turn, summon an 8/8 Skeleton.

What do you mean there's no such thing as "Skelemancy?" But "Dinomancy" is ok?

Skelemancer is a common neutral minion card, from the Knights of the Frozen Throne set.

Skelemancer can be obtained through Knights of the Frozen Throne card packs, or through crafting. 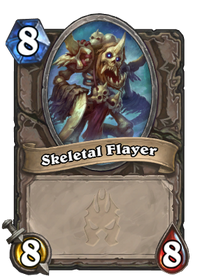 This card comes with extremely low stats, but its true power comes from its Deathrattle. While it can't be activated during your turn, it is effective at deterring enemy board clearing AoE effects. It is best used in zoo decks since those decks are countered by board clears. Skelemancer is a good card for securing tempo and keeping the pressure on the opponent because they will also need a strong single-target removal to destroy the 8/8 Skeleton. It is also a great minion to give Taunt to with cards like Bonemare. As a downside, it is helpless against Taunts and is vulnerable to Potion of Madness (even if the opponent doesn't get the 8/8 Skeleton) and Cabal Shadow Priest.

In Arena, this is a decent card for the same reason. It is able to counter common board clears in Arena such as Volcanic Potion and Primordial Drake. However, it is only good if you have an aggressive deck and are ahead on board, or else your opponent can just easily ignore a 5 mana 2/2.