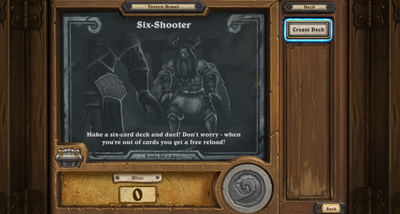 "Make a six-card deck and duel! Don't worry - when you're out of cards you get a free reload!"

This Tavern Brawl sees players doing battle with custom decks composed of six different cards. If your deck is emptied, it will reshuffle in the same six cards into your deck. A player's deck will only refill on their own turn; if forced to draw from an empty deck on the opponent's turn, the player will suffer Fatigue damage.