Sir Finley of the Sands

From Hearthstone Wiki
Jump to: navigation, search
Sir Finley of the Sands
Regular 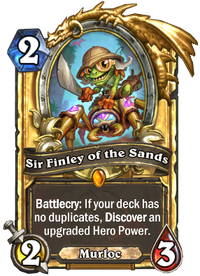 Battlecry: If your deck has no duplicates, Discover an upgraded Hero Power.

"The sands shall be my sea! And this scarab shall be my, er, strange and wriggly boat!"

Sir Finley of the Sands is a legendary paladin minion card, from the Saviors of Uldum set.

Sir Finley of the Sands can be obtained through Saviors of Uldum card packs, through crafting, or as an Arena reward. 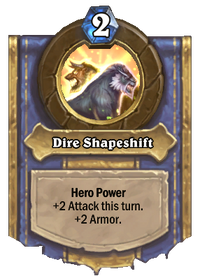 Sir Finley's Battlecry is very powerful when played early, allowing the Paladin access to a powerful Hero Power for the rest of the game. Even though Finley's condition looks restrictive, Paladin has lots of strong cards Aggressive decks can especially make use of his effect, improving their tempo with high-pressure hero powers like Demon's Bite, Poisoned Daggers, and Ballista Shot. Control decks can also make use of Tank Up! and Heal. Any archetype gains long-term value from Fireblast Rank 2, The Silver Hand, and Soul Tap.

Arguably, the largest bonus to use Sir Finley of the Sands is the ability to include Zephrys the Great and Dragonqueen Alexstrasza in your deck. Zephrys' insane flexibility and Alexstrasza's tempo swing will help make up for some of the drop in card consistency.

When drawn late, Finley is best played reactively. Generally, Ballista Shot, Fireblast Rank 2, and Tank Up! provide the most short-term value, and should be picked depending on the game state.

In slower decks, Sir Finley can be searched for using Witchwood Piper as long as he's your lowest-cost minion.

Sir Finley can also be played simply as a vanilla 2/3 murloc in murloc decks. In fact, with Tip the Scales you could run some duplicate cards and still be able to somewhat reliably activate his Battlecry if you drew him earlier.

Players can evaluate the likely usefulness of Sir Finley of the Sands based on how many Upgraded Hero Powers would accomplish certain goals.

The following lists the chances to find the Hero Powers that accomplish certain goals:

Some bosses like The Lich King's Cheat Card punish your base hero power Reinforce, so changing it to a more useful one will not only help you in the long run, but it enables cards like Zephrys the Great and Reno Jackson, which can easily win you the game.

Alternative summon (when the enemy hero is Morgl the Oracle)
Salutations cousin.

Attack
I must insist!

This card represents Sir Finley Mrrgglton as he appears during the events of Saviors of Uldum.